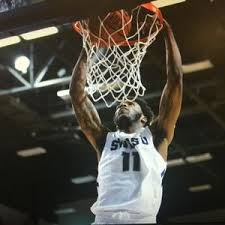 Profile: Juwan Newmen is a very athletic forward who excels in finishing above the rim, whether it is dunking or grabbing rebounds. He blocks shots at a high rate, and rebounds the ball very well in minutes given. In 19 minutes of play he averaged 12.2 points and 8.3 rebounds. Juwan snatched 224 rebounds this past year in 19 minutes of play per game. Can score inside whether facing up or back to the basket. Has a good mid-range game, and can finish around the rim with both hands. His skill level is very high, along with his high basketball IQ makes him an intimidating player. He is very passionate about the game of basketball, and has a professional approach on basketball. His work ethic is very good, and is very unselfish player that is team oriented, and very productive in minutes. Juwan started his college career at NMMI where he averaged 11ppg 8rebs, and made second team all conference as a freshman. His sophomore year he transferred to CSI, where he averaged 11.4ppg 8.9 rebs, and helped his team win 20 plus games, and also graduated with Associates Degree. His junior year he transferred to Division 1 program CCSU and had great games. Versus Yale University he had 14 points and 11 rebounds in 21 minutes. He finished his senior year at a Division 2 SWOSU where he averaged 12.2 ppg and 8.3rebs in 19 minutes of play. He graduated with Bachelor’s Degree in Interdisciplinary Studies with a concentration in Business Management.

Southwestern Oklahoma State University 2015-16 (SENIOR): Juwan senior year he averaged 12.2 points, averaged 8.3 rebounds..grabbed 224 rebounds, and shot 52.7 percent from field … to go with 27 blocks. Juwan was the player of the week two times during his senior season. Grabbed 19 rebounds along with 15 points vs OBU, came off bench and recorded 16 points and 15 rebounds vs conference champion and beat them at their place for their senior night. Had 15 points and 11 rebounds vs NWOSU. Recorded 12 DOUBLE-DOUBLES senior year.

Central Connecticut State University 2014-15 (JUNIOR): Appeared in all 28 contests… Had a double-double vs YALE 14 points

Central Connecticut State University 2014-15 (JUNIOR): Appeared in all 28 contests… Had a double-double vs YALE 14 points and 11 rebounds, versus Rider University 17 points 11 rebounds.