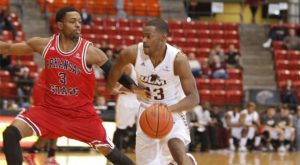 University of Louisiana at Monroe (2013-2014) Junior: Finished top-10 in the league in three-point field goal percentage at .405 (15-37)… started in 11 of ULM’s last 12 games and doubled his scoring average in that span… posted career-highs of 12 points and eight rebounds against South Alabama at home… became the only ULM student-athlete to hit 10 free throws in a game on the season as he went 10-12 at home against Arkansas State… registered three double-figure scoring games… played a career-high 36 minutes at Arkansas State and pulled down eight rebounds… drained a trio of three-pointers at both Texas State and Georgia State… averaged 4.1 points per game and made 22 appearances

Personal: Full name is Callistus Chinedu Amajoyi … Nickname “Chin” … Born June 17, 1991 in San Bernadino, Calif. … Son of Callistus and Barbara Amajoyi … Was second born of two brothers, Chibu and Oliver, and a sister Veronica … Cousin of Duke Ihenacho, a safety in the NFL for the Denver Broncos … majored in Mass communication studies