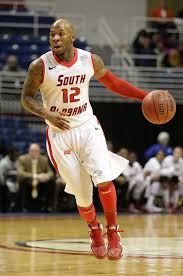 University of South Alabama Birmingham 2013-14 (SENIOR):   Antoine senior year he averaged 10.7 points, buried 66 threes, and shot 79.7 percent from the free-throw line … grabbing 98 rebounds and dishing out 41 assists to go with 24 steals. Antoine was the player of the week three times during his senior season.

University of South Alabama Birmingham 2012-13 (JUNIOR):  Started final 19 games of the season and appeared in all 30 contests… Finished fourth on the team in scoring (9.1 ppg), third in assists (41), and second in free throws (70) and first in 3-pointers (42) and steals (39)… Ranked in a tie for 13th in the Sun Belt in steals per game (1.3)… Reached double-digits in scoring 12 times, including two streaks of three games in a row… Averaged 10.2 points in Sun Belt games, putting up 19-point performances at Louisiana-Lafayette (1/10) and Western Kentucky (1/24)… Just missed double-double vs. ULL with nine rebounds… Opened Division I career with game- and career-high 21 points to lead the Jaguars to a win over No. 25/24 Florida State… Went 4-for-5 from 3-point land – 3-for-4 in the second half alone – and added two steals… All three second-half triples gave USA the lead… The 21 points are the most by a player in their USA debut since 2009-10… Earned Sun Belt Conference Player of the Week and Lou Henson Award for his performance against the Seminoles… Tallied 17 points, thanks to three 3-pointers, at Arkansas-Little Rock… Hit at least one 3-pointer in 18 of his last 19 outings… Led team in steals a team-high 12 times and recorded multiple thefts 11 times… Nabbed personal-best four steals vs. Tennessee State (11/19), added two his next time out vs. Monmouth (11/20) before equaling career-high next game at Georgia State (11/21)… Posted three steals in back-to-back home wins over Troy (2/7) and Florida Atlantic (2/9).

Junior College: Played one season at Palm Beach State… Appeared in 28 games in only season and averaged 13.5 points per contest… Converted 67 3-pointers, fifth-most in Region 8 and 38.3 percent from long range was sixth… Shot 78.3 percent from the free throw line to rank seventh in the region… Nabbed 57 steals, seventh in the region… Poured in 28 points vs. St. Johns River State College, thanks to six 3-pointers… Also reached 20-point plateau with 23 vs. Broward College… Hit five 3-pointers against BC and also drained five bombs vs. State College of Florida, Manatee-Sarasota… Recorded three or more steals 10 times, including five in a game twice.

2009-10 (FRESHMAN): Miami (Fla.): Played in 17 games… Averaged 2.9 points and shot 41.7 percent from 3-point range… Hit two 3-pointers in a game four times, including twice shooting a perfect 2-for-2 from distance… Recorded a steal in eight of his 17 games… Tallied a career-high nine points thanks to two trifectas against USC Upstate (11/28)… Made only two attempts of the night (both 3-pointers), dished out career-high seven assists and grabbed three rebounds vs. Nova Southeastern (11/16).